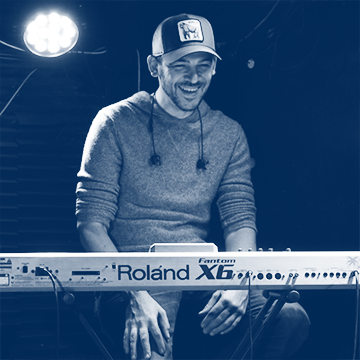 Dylan Charbeneau (aka BLVKSHP) began composing at an incredibly young age and joined the Score a Score roster in its early years, after many years of touring and producing successful albums. His compositions span a seemingly limitless range of genres and land in a variety of mediums from trailers to ads and beyond.  Some of his most notable credits include Disney Universe, Quaker Oats’ ‘Off You Go’ campaign, the LORO trailer, Pretty Little Liars, Cover Girl, promos for HBO’s Ballers, and Fastest Car on Netflix.

When I was 4 years old, I started playing classical piano. Fell in love with it immediately, and everything stemmed from there.

To make an eerie and unique low atmospheric tone, I set up mics in my old Los Angeles recording studio parking lot and rolled an old busted piano off the roof. Then I took the crash, which sounded amazing with all the wood and strings reverberating from the fall, and time stretched it from about 7 seconds to 2 minutes in length. Overkill, but awesome.

Even more so than in the studio, inspiration strikes the most when I go on my daily walks through the streets of Barcelona. The architecture here is detailed, spans centuries, and is full of inspiration.

Raiders of the Lost Ark

Stravinsky. He innovated classical music by effectively combining Romanticism, Neoclassicism, and Serialism to create a sound that was uniquely his. I find his work to be some of the most interesting and moving music ever created.

Robyn, all the way.