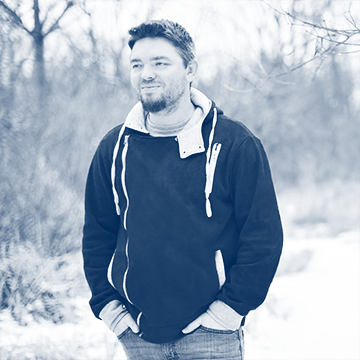 Chris Burrink adds a touch of magic to the Score a Score roster with his intriguing emotional style. His compositions have enhanced stories for filmmakers and brands around the world. His film credits include the original score for the feature documentary The Flying Dutchmen, Shaun Monson's film Unity, and the Netflix series Fastest Car. His music has also been featured on the White House Youtube channel and licensed by brands such as Google, Microsoft, TikTok, LinkedIn, Marriott, Hyundai, Blue Cross Blue Shield, World Bank and Cigna.

It was ultimately the movie August Rush that inspired me to quit my paintless-paintball business and start making music.

My two-year-old made an extraordinary snort while the camera was rolling. The sound was nearly perfect already—just needed a little EQ.

Brazillian Jiu-Jitsu. My thoughts become calm and clear when I have to defend myself against someone who's trying to break or choke me.

I’m renovating our home at the moment, so I've been sampling my construction materials and tools. I’ve had the most fun playing with the pile of corrugated drain pipe.

Well, I had a fast-turnaround project come in right as a bad bios update bricked my motherboard. So I drove up to the city to buy new parts and assembled a new machine to meet the deadline. Okay, okay— I splurged! Now, I stare at my resource monitor and grin like Monty Burns.

I like to hum to the sound of motors and machines. It can be the refrigerator at the gas station, a buzzing light, the neighbor's lawnmower, or the steady 220Hz drone of my Sonicare toothbrush. For me, inspiration usually tastes like toothpaste.

The Flying Dutchmen. I was overwhelmed with pride & emotion when I experienced the audience's laughter & tears from the back row of the theater.

The Brrr Rink. Each winter I build and maintain a temporary 5000 sq’ ice rink in my yard, I stare at it with great pride, and then I pray that people will get to enjoy it before it melts.

I just love the way that Thomas Newman uses harmonics. Where others might prefer more of a grandiose approach, he often finds more subtle ways to get the job done, and I think his humility gives him access to audience emotion at a deeper level.

“Compare yourself to who you were yesterday, not to who someone else is today.” – Jordan Peterson