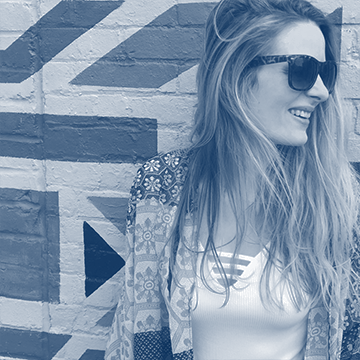 Joni Fuller is an exciting talent and an increasingly bright light on the Score a Score roster, always maintaining distinction with consistently elevated and lush orchestration paired with equally incredible production chops. Her classical training in all things stringed and her virtuosic mastery of the violin can be heard at the center of much of her work. Her music spans across a variety of mediums, from custom music for brands and networks like FX, to marketing campaigns for films like Us, X-MEN: Dark Phoenix, Bird Box, Amazon Empire: The Rise and Reign of Jeff Bezos, Blow The Man Down, and Hold The Dark.

I grew up listening to a lot of my parents' music and, inspired by an early love of The Waterboys, my Mum and Dad bought me a cheap violin for my 5th birthday. Some of my earliest memories include jamming along to 12-bar blues and Jimi Hendrix songs with my Dad strumming guitar. I wrote my first song when I was 8 and attempted to start a band with my classmates, but when I realised that they did not share my level of commitment I begrudgingly went solo. I've never looked back!

My biggest inspiration in terms of pure mastery of skill and work ethic has to be Prince - I've been a huge fan since I was a teenager, and his music has been the soundtrack to so many events in my life. I also pull daily inspiration from a lot of female artists/singer-songwriters, including Joni Mitchell, Rickie Lee Jones, Kate Bush, Lana Del Rey, St Vincent, Janelle Monáe.... the list goes on! As a string player and arranger, I often refer to Nicholas Britell's If Beale Street Could Talk and Hildur Guðnadóttir's Joker scores for inspiration.

I love any excuse to get my violin out and jam at an open mic night, but when I'm on my own I tend to gravitate towards the guitar or piano.

Always on public transport! I get the train down to London a lot, and more often than not inspiration will strike and I’ll have to grab my phone to make a quick voicenote. I'm always so self-conscious that when I listen back later I can barely figure out what I was trying to hum.

Five years ago, I came up with the idea to offer live string recordings to composers and producers. After sending out some initial cold-call emails, I started to see a lot of work come in via word of mouth, and it allowed me to offer a useful service to composers while connecting with people I might not have had the opportunity to meet otherwise. I'm proud that I found a niche that enabled me to share my skills and build my profile in the composer network.

After I finished school, I ran the music department at a local high school for a few years and taught around 100 teenagers every week. It was a complete baptism by fire as I had no formal teacher training, but I still hear from pupils from time to time and it always means such a lot when they tell me they're still playing the instruments I taught them. I'm passionate about the importance of music in education, and I feel proud that I did my small bit to keep a few teens on the straight and narrow!

This is an impossible question, but I'll try my best... I think I'd have to choose Hounds of Love by Kate Bush. It's one of my favourite albums of all time, and is so eclectic that I could listen forever and it would never grow old.

A few years ago, a fellow composer told me about the concept of 'Deep Work' and it really resonated with me. It's so easy to get pulled in by notifications and Instagram scrolling, so I make a very conscious effort to minimise distractions while I'm working. This not only allows me to engage fully in what I'm writing, but it actually gets the job done faster so I can have better quality free time afterwards.